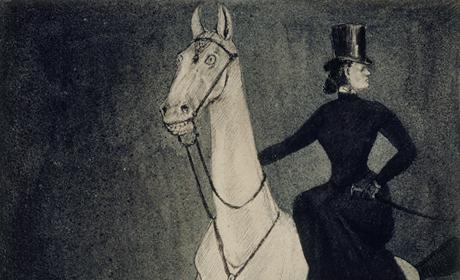 On September 25, the Neue Galerie New York opens the exhibition “Alfred Kubin: Drawings, 1897-1909,” featuring over 100 works on paper by the artist Alfred Kubin. This is the first major museum exhibition of his work ever held in the United States, and it focuses on his nightmarish early works on paper. The exhibition is organized by Annegret Hoberg, curator of the Städtische Galerie im Lenbachhaus, Munich.

“Kubin plumbs the depths of the shadow world of the human subconscious, with its unguarded impulses and fears,” said Renée Price, Director of the Neue Galerie. “His drawings have the evanescence and the frightening clarity of our darkest dreams.”

Though a contemporary of artist Gustav Klimt and designer Josef Hoffmann, fellow Austrian Alfred Kubin (1877-1959) eschewed the decorative impulses found in their work. Instead, inspired by the art of Francisco Goya, Félicien Rops, Max Klinger, James Ensor, and Edvard Munch, Kubin produced dark, hallucinatory visions of violence and eroticism. Literature served as an inspiration as well, and Kubin drew from the masterpieces of Edgar Allan Poe, Fyodor Dostoevsky, and Nikolai Gogol. Illustrations from Kubin’s bizarre 1908 novel The Other Side will be included in the exhibition.

The fully illustrated catalogue accompanying the exhibition will be the definitive English-language monograph on the artist to date. Published by Prestel, it includes essays by Annegret Hoberg, Peter Assmann, Klaus Albrecht Schröder, Andreas Geyer, Werner Hofmann, and Olaf Peters.