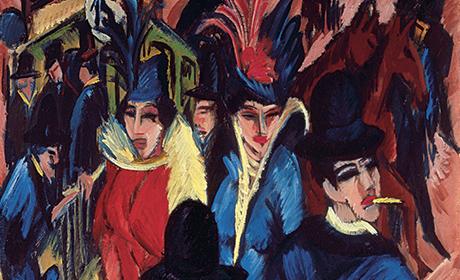 With this exhibition, Neue Galerie New York celebrates its acquisition of Berlin Street Scene (1913-14) by Ernst Ludwig Kirchner. The recently restituted painting is widely recognized as one of the greatest German paintings of the twentieth century, and a landmark of Expressionism. The exhibition is on view from July 26 through September 17, 2007.

Ernst Ludwig Kirchner was a founding member of the artists’ group Die Brücke (The Bridge) in Dresden in 1905. In 1911, the group moved to Berlin. Kirchner was enthralled by what he called “the symphony of the great city,” and responded to the intensity of the street life he found in Berlin by recording the urban spectacle around him.

Shortly after arriving in the capitol city, Kirchner met sisters Erna and Gerda Schilling. The features of the two monumental figures in Berlin Street Scene are recognizably modeled after the sisters. They are shown as thoroughly modern women, dressed in fitted gowns and feathered hats, striding with confidence.

Yet there is a dark undercurrent to the work: the central figures are portrayed as prostitutes parading down a busy avenue, and the slashing liens of the composition convey a taut emotional power. With its charged and anxious atmosphere, Berlin Street Scene suggests an uneasy dialogue between primitivism and modernity.

In addition to Berlin Street Scene, the exhibition will feature a recently acquired Kirchner sculpture, Standing Girl, Caryatid (1909-10), as well as a selection of paintings and works on paper that survey Berlin during this period; they are by Kirchner, Otto Dix, George Grosz, and Christian Schad.