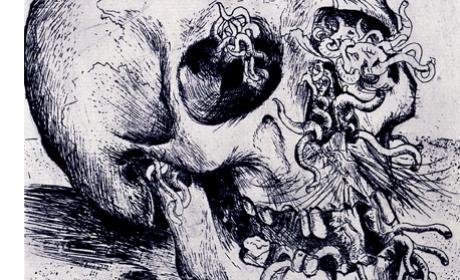 The experience of war has rarely been captured as precisely by a work of art as by Otto Dix's Der Krieg (War), a portfolio of fifty prints published by Karl Nierendorf. The artist had spent more than four years in the trenches and suffered the terrible events at close proximity. He was able to condense his own experiences into a brutal, but aesthetically rich series that alternates among a variety of styles.

Dix established the sequence for the portfolio himself; it was published in 1924 in an edition of seventy copies. The series was subdivided into five sections of ten sheets each, following no single narrative. All the prints depict aspects of trench warfare and daily life of soldiers at the front. We are confronted with ruined landscapes, with shot and torn soldiers' bodies, as well as with assaults, bombardments, and visits to brothels and bars.

The everyday madness of war is illuminated in these sheets as if by a blindingly bright light. Events are either set in deep black or else they radiate before the viewer's eyes with painful clarity. These effects are achieved by virtuosic use of graphic techniques, which Dix employs to brilliant effect. By etching deep into the plate, he was able to produce grainy blacks, while his nervous scratching in drypoint records spindly threads on the plate. This calculated pluralism in terms of graphic expression gives each sheet its own characteristic features.

The series is striking not only for its meticulously described horror but also for the artist's sardonic humor. He interprets the war as a grotesque and brutal drama: skeletons grin derisively, while weirdly agile worms make their way through empty eye sockets and nasal cavities-an ironic interpretation of Friedrich Nietzsche's dictum, "Die and become!" The sheets in the series stand in sharp contrast to the glorification of war as a character-forming event, at attitude evoked frequently in the Weimar period. Dix refutes this propagandistic stance by showing the reality of war, with its ever present suffering and death. In that respect, both Francisco Goya's Desastres de la guerre(Disasters of War) and Otto Dix's Der Krieg remain as topical as ever. Both are authentic reports on the horror of wars, made memorable by their critical expressive power.

In 1919, the year World War 1 ended, Max Beckmann's second portfolio of graphic works, Die Hölle (Hell), was published. The title of the series of ten large-format transfer lithographs is telling, and it penetrates to the core of Beckmann's art and worldview. In these prints the artist was reacting directly to contemporary history, but he attempted to transcend the present moment and create something more than mere documents of an epoch. The ordinary and the metaphysical, history and theater all play off of one another. It is as if Beckmann were diagnosing the present from a heightened perspective that would reveal hell to be a form of existence that people confront daily.

Beckmann's profound underlying pessimism was influenced not only by the war, but by the philosopher Arthur Schopenhauer. In this view, only through empathy could there be the possibility of overcoming the horror of our own nature. The first sheet in the series, Nachhauseweg(The Way Home), makes this clear, as the artist himself clutches the amputated arm of a man horribly disfigured in war, leading him along a road, perhaps to his home. Die Strasse (The Street) is filled to the brim with people impoverished or disabled by the war, depicted through a kind of Cubist splintering.

Beckmann presents the painful birth of the first German republic in highly dramatic fashion. Martyrium (Martyrdom) shows the socialist Rosa Luxemburg, who was brutally murdered by soldiers of the Freikorps (free corps). She is mocked and tortured on the cross, with Beckmann making deliberate use of Christian iconography to interpret contemporary history. Die Hölle (Hell) shows a collapsing attic in which the torture and murder continues. The sheet was based on an earlier oil painting, a clue that each of the sheets in the portfolio lays claim to painterly qualities. In Die Letzten (The Last Ones), Beckmann alludes to the attempted revolutionary coups of the time; the painter himself has taken up a machine gun to show his solidarity with the rebels. By contrast, he is disgusted equally by the leftist salon in Ideologen(Ideologues) and by the reactionary forces singing in Das patriotische Lied (The Patriotic Song). Beckmann adopts a radical stance rooted in humanism, vehemently advocating for the establishment of a new inner order.