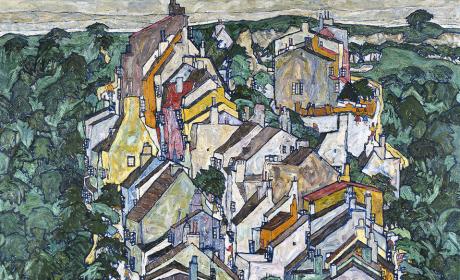 The exhibition marks the 100th anniversary of the passing of two of the greatest Austrian artists of the twentieth century.

Gustav Klimt (1862–1918) and Egon Schiele (1890–1918), although born nearly thirty years apart, both tragically died in 1918—the same year that the Austro-Hungarian Empire ceased to exist following its defeat in World War I. Over the intervening century, the works of Klimt and Schiele have come to define the fertile creativity that marked the so-called “joyous apocalypse,” an apt term used to connote the waning days of Habsburg rule. This show pays tribute to the groundbreaking achievements of Klimt and Schiele, two masterful artists who are key figures in the collection of the Neue Galerie New York.

“The work of Gustav Klimt and Egon Schiele, often seen as only expressing the decadence and turmoil at the turn of the century, is actually filled with singular intensity and originality that helped usher in a new kind of modernism.”

Image caption:
Egon Schiele (1890–1918)
Town among Greenery (The Old City III) (detail), 1917
Oil on canvas
Neue Galerie New York
In memory of Otto and Marguerite Manley, given as a bequest from the Estate of Marguerite Manley