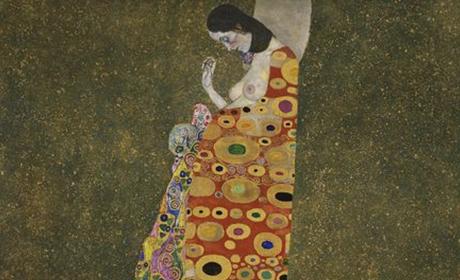 On October 18, the Neue Galerie New York opens “Gustav Klimt: The Ronald S. Lauder and Serge Sabarsky Collections,” with eight paintings and more than 120 drawings by the controversial artist, on view together for the first time. The exhibition will also feature a reconstruction, with original furnishings, of the receiving parlor from the second Klimt studio.

“Gustav Klimt” unites the collections of Ronald Lauder and Serge Sabarsky, co-founders of the Neue Galerie, and will fill all the gallery spaces in the museum. Together their collections comprise the finest gathering of works by Klimt in the United States. The exhibition is organized by Renée Price, Director of the Neue Galerie. This is its sole venue, where it will be on view through June 30, 2008.

“Gustav Klimt is an artist of paramount importance in the development of modern art,” said Ronald S. Lauder, President of the Neue Galerie. “He is central to our museum’s collection and mission.”

“Klimt’s work embodies the quintessence of fin de siècle Vienna: its richness, its sensuality, and its capacity for innovation,” said Renée Price, Director of the Neue Galerie. “It is a tremendous honor to present this remarkable exhibition at the Neue Galerie, which has become the premiere destination outside of Austria for admirers of the art created by this complex and very private man.”

This exhibition is the first museum retrospective of the work of Gustav Klimt ever held in the United States. Klimt was little known in the United States during the first half of the twentieth century. In the decades immediately following his death, there was virtually no American interest in the artist. His reputation gradually began to grow in the 1960s, with Klimt eventually reaching cult status. Today, he is internationally recognized as a major figure of twentieth-century art.

Besides paintings and drawings, the exhibition will contain rare vintage documentary material, ranging from letters, photographs, and personal effects, such as the artist’s cufflinks and seal (both designed by the architect Josef Hoffmann), to the only known surviving example of the painting smock that Klimt wore.

As a special addition to the exhibition, the Neue Galerie is presenting the re-created interior—based on original floor plans and a 1912 photograph—of the receiving room from Klimt’s studio at Josefstädter Strasse 21, Vienna, which was occupied by the artist from 1892 until the summer of 1912. The display includes the original furnishings designed by Josef Hoffmann, executed by the Wiener Werkstätte, and generously loaned from the collection of Ernst Ploil, Vienna. The installation will be accompanied by period music, including works by Beethoven, Brahms, and Schubert that Klimt was known to have admired.

The catalogue, magnificently illustrated and accessibly written, is designed for the general reader, as well as artists and art historians. Edited by Renée Price and published by Prestel, it features essays by Marian Bisanz-Prakken, Emily Braun, Alessandra Comini, Ronald S. Lauder, Sophie Lillie, Tobias Natter, and Renée Price, among others. It contains an interview with Maria Altmann, niece of Adele Bloch-Bauer and the lead plaintiff in the restitution case that brought the Klimt painting of Adele, which graces the cover of the catalogue, to the United States.

On the lower level of the museum will be a display of children’s drawings created by students in Vienna, ages 10 to 14. The drawings are based on the departure from Austria of the Klimt painting Adele Bloch-Bauer I. They are presented at the Neue Galerie under the title “Adele Comes to America.”