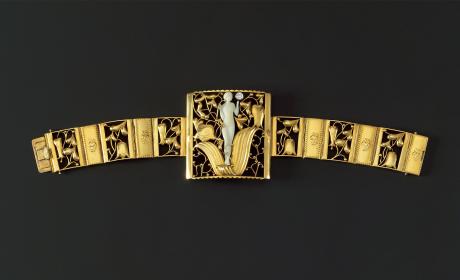 The Wiener Werkstätte (Vienna Workshops), an artist and craftsmen collective, was launched in 1903. At its outset, the firm focused on metalwork, including jewelry. The group was initially comprised of two designers—Josef Hoffmann and Koloman Moser—and three artisans. This exhibition includes a group of rare and mostly unique designs of jewelry by Hoffmann and Moser as well as other designers who later joined the firm, including Carl Otto Czeschka and Dagobert Peche.

In 1904, Emilie Flöge and her sisters, Helene and Pauline, opened the Schwestern Flöge (Flöge Sisters) fashion salon. Hoffmann and Moser designed custom furnishings for the salon that were fabricated by the Wiener Werkstätte. The request to outfit the Schwestern Flöge was their first important interior design project. The Flöge boutique had an illustrious list of clients, including several women who commissioned Klimt to paint their portraits. Shown in this exhibition is a velvet and brocade coat dress with silk lining and fur trim that was made by the Schwestern Flöge.

The Wiener Werkstätte inaugurated its own fashion department in 1910, which quickly proved to be one of the most profitable divisions within the firm. It catered to a well-heeled clientele and offered artistic clothing, hats, shoes, and other accessories. The Wiener Werkstätte popular artist postcards, launched in 1907, were an inexpensive way to market its accessories and fashion designs and a number of them are on display in this presentation. Egon Schiele even briefly tried his hand at postcard designs and three that he made of his sister Gerti are included in this show. Notably, Gerti Schiele worked as a fashion model for the Wiener Werkstätte and posed for her brother's most famous early paintings.