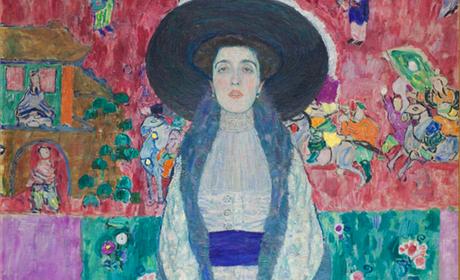 Gustav Klimt: Five Paintings from the Collection of Ferdinand and Adele Bloch-Bauer

From July 13 through September 18, 2006, the Neue Galerie will host "Gustav Klimt: Five Paintings from the Collection of Ferdinand and Adele Bloch-Bauer.” The exhibition consists of masterworks by Klimt that had been restituted to Maria Altmann and the heirs of the Bloch-Bauer family by the Austrian government.

The best-known of the five works in the exhibition is Adele Bloch-Bauer I, which the Neue Galerie has agreed to acquire. In this painting, one of Klimt's greatest achievements, gold is used in a variety of contexts, from the lustrous background to the shining fabric of Adele's gown. The subject seems to become one with her glowing surroundings, yet a distinctive figure emerges from the profusion of decorative motifs. Adele appears as a modern, complex woman, her intelligence as evident as her sensuality. Her hands are folded in such a way as to conceal a deformed finger, yet the gesture only adds to her mysterious grace.

Adele Bloch Bauer II (1912) is a more traditional portrait composed of strong, vivid colors, which show the influence of Impressionism. Klimt also painted exquisite, light-dappled nature scenes and townscapes, such as those that will be on display in the exhibition: Birch Forest(1903), Apple Tree I(ca. 1912), and Houses at Unterach on the Attersee (ca. 1916).

The story of how Adele Bloch-Bauer I and the four other works in the exhibition came to be returned to Maria Altmann and the Bloch-Bauer heirs is a tale of persistence. The five paintings had been stolen from the Bloch-Bauer family by the Nazis in 1938. Earlier efforts at restitution had failed, and until recently, the paintings had been on display at the Österreichische Galerie Belvedere in Vienna. Finally, after a lengthy legal battle, the works were declared stolen property and returned to their rightful owners.