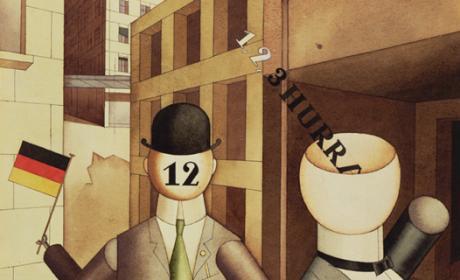 From Expressionism to the Bauhaus: Highlights from the Museum of Modern Art

In its nearly seventy-five years, The Museum of Modern Art has assembled an unrivaled collection of art objects, while organizing an exceptionally ambitious program of exhibitions and related educational activities. Yet its beginnings were modest and not especially well timed.

The Museum opened to the public on November 8, 1929, just ten days after the collapse of the American stock market. Despite the pervasive atmosphere of public anxiety, the Museum was an immediate success. Its first exhibition, Cezanne, Gaugin, Seurat, van Gogh, drew more than forty-nine thousand visitors in just five weeks, the largest audience to attend an exhibition of modern art since the Armory Show sixteen years earlier.

The Museum's first director, Alfred H. Barr, Jr., took a wide-ranging view of international developments in modern art. He maintained a particularly keen interest in German art of the time. In 1931, he mounted the exhibition German Painting and Sculpture, with 123 works by twenty-one painters and seven sculptors. The show favored Expressionist art, bringing a new audience to this work; one reviewer noted, "The Germans might almost as well have been painting in an airtight box up in the attic for all we Americans have been able to see of it in this country"

The following year, at Barr's suggestion, the Museum presented the influential Modern Architecture: International Exhibition. Organized by Philip Johnson, the pioneering exhibition consisted of models and related drawings by a number of architects; prominent among them were the German-born Mies van der Rohe and Walter Gropius. The exhibition helped establish the International Style as the architectural vanguard. The Museum continued to highlight the achievements of German designers with a 1938 exhibition devoted to the Bauhaus.

In 1957, the Museum organized the exhibition German Art of the Twentieth Century. This encompassed a broad range of material, from the Expressionist art of Die Brücke and Der Blaue Reiter to the paintings and drawings of the Neue Sachlichkeit movement to the design objects of the Bauhaus. The exhibition drew surprisingly large crowds, given lingering anti-German sentiment in the aftermath of the Second World War. The American interest in this subject also caught the attention of the German press; the title of an article in the newspaper Die Zeit asked incredulously, "Sieg deutscher Kunst in Amerika?" (Triumph of German art in America?) Through its open-minded and aesthetically driven approach, The Museum of Modern Art helped foster and eventually restore an appreciation for the achievement of German artists in the twentieth century.

In recognition of their accomplishments, this exhibition is dedicated to Alfred H. Barr, Jr., and Philip Johnson.