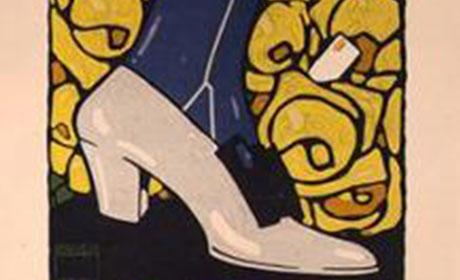 In the early 20th century, Berlin emerged as the center of German commercial, cultural, industrial, and social spheres. The business sector demanded new and exciting advertising to capitalize on the expanding markets. Companies regularly held poster competitions to identify young talent for their campaigns. Lucian Bernhard was one notable artist who emerged.

In 1905, Bernhard entered a poster contest for the Priester Match Company. He submitted a stark design that included a pair of matches and the brand name. Initially it was rejected by the panel of judges and discarded. However, Ernst Growald, the deciding judge, was underwhelmed by the remaining submissions, fished Bernhard’s from the trash, and proclaimed his design the winner. Bernhard subsequently won a contract with Hollerbaum & Schmidt, Germany’s leading poster printing company, and went on to revolutionize the advertising world by popularizing the Sachplakat (object poster).

Bernhard was not the only artist to embrace the Sachplakat, also known as Plakatstil (poster style) design. Hans Rudi Erdt and Ludwig Hohlwein were other notable figures in the movement. Plakatstil was a marked contrast to earlier more ornate advertisements. Here words were kept to a minimum and the object or figure dominated the composition. The simple imagery reflected a shift towards more realistic depictions. “Art is boring—one wants facts,” wrote Alfred Döblin in defining this wave of reality-focused art and design.

While these designers may have benefitted from the rise in commercial activity, they were nonetheless sympathetic to the concerns of the day and they captured the spirit of Berlin. Many worried that modernization would erode traditional values and corrupt social mores. The vibrant colors, crisp images, and effervescent materialism belie the undercurrent of anxiety that was a hallmark of urbanization, coupled with a longing for a perceived simpler past.